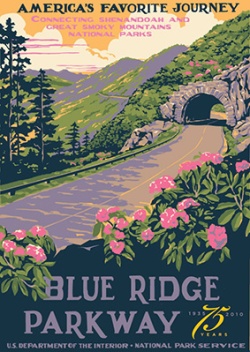 The road in the landscape is a  multi-faceted subject, as we could read in the previous posts by Gerdy Verschuure and Steffen Nijhuis. Driving as a means to experience the landscape is one of these aspects, which sometimes has been exalted to an art in itself.

When traveling through the United States, one of the greatest experiences is the travel itself: driving days on end through expansive landscapes on roads straight as an arrow where the landscape morphology permits, or following the contours of the natural landscape where it doesn’t. This fall I fulfilled a long since wish: driving the Blue Ridge Parkway. Starting from the northernmost tip, we drove south for two days, zigzagging from breath-taking view to breath-taking view, until a flat tire forced us to return to the inhabited world. 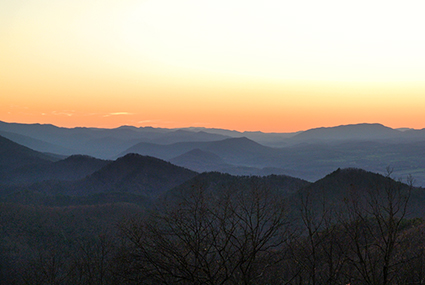 The tradition of building parkways goes back a long way, to one of the godfathers of landscape architecture. When Frederick Law Olmsted and Calvert Vaux had created Prospect Park in 1868, they felt that, although the park was recognized as a magnificent natural reserve, it lacked any corresponding system of roads leading to it. So they created the Eastern Park-Way, the first parkway. Parkways – wide avenues, with a differentiation in lanes for pedestrians, horse riders and carriages, supported by planting – were not quite parks in themselves, but not just streets either, and became known as ‘ribbon parks’. In Olmsteds days the car did not play a big role yet, but in the following decades, when mass-production of automobiles made motorised traffic widely available, the idea that one could enjoy nature while driving on the road remained an issue. Half a century later the concept of the urban parkway was extended to the scale of the country, by creating grand scenic parkways – roads across the land leading into the wilderness, allowing independent journeys into National Parks which were previously accessible by public transport only.

One of the first scenic parkways to be built was the Blue Ridge Parkway in Virginia and North Carolina. It runs between Shenandoah National Park and the Great Smokey Mountains National Park – a distance of 469 miles. Stretching across the peaks of the Appalachian Mountains range, it was designed to respond to the contours of the land. It was designed and constructed in sections: as land was purchased by the states, rights-of-way were approved and contracts secured through the Bureau of Public Roads. Construction began in 1935, and when work halted due to the outbreak of World War II, some 170 miles were complete. In the 1950s construction resumed, and by 1968 the parkway was complete, except for a 7.7-mile stretch. It was not until this section was completed in 1987 that the Blue Ridge Parkway fully opened, 52 years after the project began.

Essential for the experience of the parkway are its rest-stops, positioned at a bend in the road which opens up to an unexpected wide view, or just before a tunnel, which as an impressive feat of engineering, is considered a worthwhile view in itself.

As befits a true National Park the Blue Ridge Parkway received its own sign, expressing the value ascribed to what is basically just a road. The sign highlights a remarkable landscape architectural aspect, repeated over the full length of the road: often the forest is cut away to allow for the view, leaving one last tree standing, creating depth in the perspective and anchoring the viewer to the place in relation to the horizon.

While the urban parkway introduced the benefits of nature to the city, the ever-present problem of cross-traffic managed to erode the ideals of a continuous passage in nature. The creation of national parkways allowed for a complete removal of the parkway from any reference to urban contexts. In the design of the parkways, infrastructural space is considered a valuable territory on its own, carefully choreographed in the landscape, interconnecting parks and park areas into a coherent system, in such a way that motorists could enjoy nature while in transit. More than just a feat of engineering, these infrastructural lines can be seen as a cultural phenomenon where movement is the motor of a physical and visual experience. 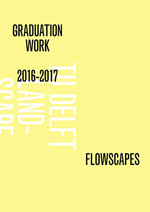